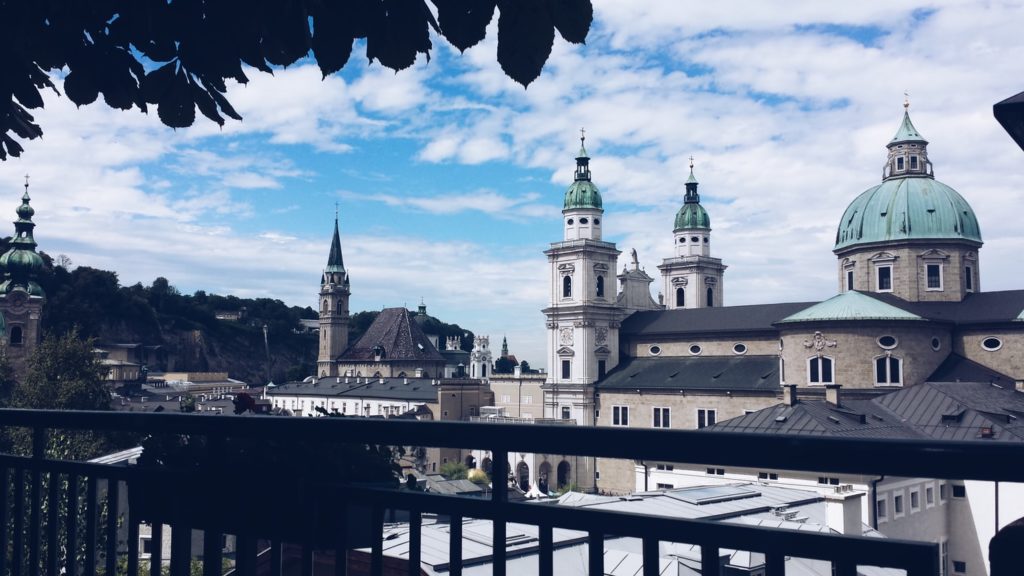 Salzburg and Mozart share a passionate romance. The composer’s silhouette adorns numerous sites in the Austrian city. Today, we visit his birthplace at 9 Getreidegasse, along with the large building he inhabited between 1773 and 1780 at 8 Makartplatz, on the other bank of the Salzach, without forgetting to taste the Mozartkugeln invented in… 1890 by the chocolate maker Fürst.

As a tribute to its leading man, Salzburg devotes an entire weak to the music of Don Giovanni’s composer. At the helm of the aptly named “Mozart Week”, Rollando Villazon demonstrates his vivid imagination. For the second edition under his leadership, the Franco-Mexican tenor explores Mozart’s production for wind instruments. A programme that will literally blow you away, with an exceptional performance of Händel’s Messiah (in the version corrected by Mozart) led by an extraordinary duo: director Bob Wilson and conductor Marc Minkowski. Three other events will follow this exceptional alliance: the sublime Gran Partita interpreted by the Wiener Philharmoniker, conducted by the legendary Daniel Barenboïm, a lavish vocal and chamber-music programme led by Riccardo Minasi, and a closing gala directed by Daniel Harding, where you can hear the moving Clarinet Concerto by Andreas Ottensamer.

THE MESSIAH, by W.A. Mozart

Robert Wilson stages one of Händel’s four oratorios that Mozart reworked on the orders of Baron van Swieten. In The Messiah, Mozart translated the text into German, arranged the overall structure and subtly reorchestrated the parts for woodwind and brass instruments.  Echoing this top-level alliance, there is the  contemporary partnership between two artists at the peak of their abilities: director Bob Wilson and conductor Marc Minkowski. The former masters the unique arts of movement and poetry, while the latter leads his French period instrument ensemble Les Musiciens du Louvre, promising a fascinating visual and musical experience.

– Concerto for horn and orchestra in E-flat major

– Concerto for piano and orchestra in F major, KV 459

The great baroque conductor Riccardo Minasi imagines a lively portrait of Mozart. The soloists invited are truly exceptional, especially the famous American pianist Robert Levin. However, we are struck above all by the programme’s intelligence: extracts from Mithridate (brilliant opera seria written at the age of 14), along with sublime concertos for horn and piano, and the Re Pastore arias led by Italian soprano Giulia Semenzato: the young Mozart’s music shines out in all its splendour. And as if this splendour wasn’t luxurious enough, Minasi conducts the youthful, spirited Mozarteum Orchestra Salzburg for a final touch of magnificence.

– Concerto for piano and orchestra in A major, KV 488

In the works by the composer of Don Giovanni and The Magic Flute, the feminine voice likes to lose itself in high notes (just think of The Queen of the Night) and the heroines of his operas all share an ardent, delicate and breezy sensitivity. The very promising soprano Louise Adler, recognised at the International Opera Awards in 2017, presents the most moving arias of Susanna, Pamina and even Fiordiligi. Another highlight of the evening is the orchestral accompaniment by the Chamber Orchestra of Europe, whose collaborative methods (the musicians choose their conductor, in this case the young British star Robin Ticciati) is the best strategy for excellence.

– Concerto in A major for clarinet and orchestra, KV 622

Its unique functioning (the musicians are the managers) makes the Mahler Chamber Orchestra one of the most exciting orchestras in the world. Daniel Harding conducts a magnificent closing gala at the end of the Mozart Week. This time, the programme includes pages from the Austrian composer’s last period: Cosi fan Tutte, La Clémence de Titus and the eternal Clarinet Concerto interpreted by the brilliant Andreas Ottensamer, solo clarinettist of the Berlin Philharmonic. Leaving Mozart and the beautiful city of Salzburg will certainly be a sad occasion!

The price of this trip does not include: extras • transport • airport transfers.

TOP
Social media
FB
INS
LKD
32, rue Washington
75008 Paris — France
+ 33 1 43 59 10 14
Contact us - Any travel ideas?
Newsletter
© La Fugue 2017
We use cookies to enhance your browsing experience and provide you with a more personalised service. If you continue browsing, we consider you to have accepted their use.Ok